Alexander Calder (1898-1976)  was born in Launton, Pennsylvania.  The son of two generations of sculptors, Calder was first trained as an engineer at the Stevens Institute of Technology in Hoboken, New Jersey, where he studied from 1915 to 1918. After working as a draftsman and as an engineer in California between 1919 and 1923, Calder resumed study in 1923 at the Art Students League in New York City.  Here he worked with George Luks and John Sloan.  In 1925, Calder became an illustrator for the National Police Gazette in New York City.  In 1926, he shifted his place of study to Paris, where he spent several months drawing at the Grande Chaumiere.  Calder established himself throughout Europe between 1926 and 1930 as an individualist and humorist with studies such as his miniature “Circus” of 1927-1928, now in the Whitney Museum, New York.  In 1930, Calder settled in Paris and came into contact with other abstract artists, among them the painters Piet Mondrian, Fernand Leger, Theo van Doesberg, and Jean Arp.  Calder experimented with abstraction, making his first “mobiles” in 1931.  In 1933, Calder returned to America, setting up his studio permanently in Roxbury, Connecticut.  He began producing his more monumental “stabiles” in 1937.

Calder’s mature works, rendered always in bold primary colors, are sculpted with paradoxical intensions.  “Mobiles” show a fascination with colored forms in space as they interact driven by air currents.  “Stabiles,” can be found all over Europe and America.  Calder’s many awards include prizes at the Sao Paolo Biennale and the Venice Biennale.  He has been honored with retrospective exhibitions, among them the exhibition of 1943 at the Museum of Modern Art in New York City. 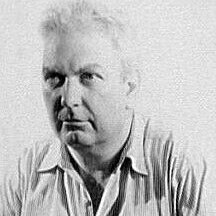