Bill Barrett was born in 1934 and attended the University of Michigan, where he began welding and experimenting with metal. He used abstract geometric and natural shapes to embody idols empowered with the dynamism of movement. Over the course of his career, Barrett developed the philosophy that the viewer ought to have different interpretations of a sculpture than the one the artist intended, stating: “That’s what I like about abstract art: you get a chance to participate.” Barrett spent most of his career in New York, creating commissions at his Worth Street studio.

Barrett utilized his metal experimentation in many of his commissioned works, installing numerous aluminum and bronze sculptures throughout public locations in both Connecticut and New York City.  Among the most popular in Connecticut is Barrett’s aluminum structure Guardian (1986) which stands near Hartford’s Criminal Court at the corner of Lafayette and Russ Streets. 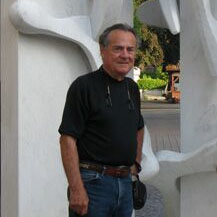