Chauncey Bradley Ives was born in Hamden, Connecticut, to a family of farmers. However, in 1825, despite family opposition, he apprenticed himself to a New Haven craftsman, R.F. Northrop, and learned the skills of a woodcarver. Eager to become more than an artisan, Ives soon began to model in clay and to carve likenesses in stone. While in New Haven, Ives studied under Hezekiah Augur, the first and most prominent sculptor in Connecticut. Ives moved to Boston where he worked briefly around 1840 before opening a studio in New York City in 1841. In 1844 he sailed for Italy in search of better facilities and a warmer climate to combat his tuberculosis.

Ives spent the next six years in Florence, where he was influenced by Henry Kirke Brown, another American working in Florence. Brown’s statue of Ruth and his classical bust, La Grazia, inspired Ives to try an idealizing style. In 1851, Ives relocated to Rome where he adopted the neoclassical manner inspired by the art of antiquity. Ives became a prolific and permanent member of the American colony in Rome. With the exception of brief business trips to America, he remained in Rome for the greater part of his life.

In 1855, on a visit to America, Ives held a New York City exhibition in which his Rebecca at the Well and Pandora were great successes. His popularity was immense, and his work sold quickly. Ives’ neoclassical style persisted through the 1860’s and 1870’s when he produced such works as: Jephthah’s Daughter, Egeria (1976), and The Truant. During this time, Ives modeled portrait busts in which he emphasized the comely aspects of his patrons and disregarded unflattering details, smoothing away any irregularities that detracted from an ideal representation.

Late in his career, Ives was commissioned by the state of Connecticut to carve its contributions to the Statuary Hall in the National Capitol in Washington, D.C. Ives produced marble statues of Jonathan Trumbull (1869) and Roger Sherman (1870), which were put in place in 1872.

For Hartford, Ives was commissioned to make the posthumous memorial statue of Bishop Brownell (1868), the founder of Trinity College (originally Washington College). That statue originally stood at the intersection of Trinity Street and College Street (now Capitol Avenue) but was moved when Trinity College relocated to its current campus in 1876. When the new State Capitol building was under construction in the mid-1870s, Ives was the artist selected to create two of the full-length statues of the early founders for the east façade facing the city. They are the middle two statues of Jonathan Trumbull (1878) and Roger Sherman (1878).

Ives greatly reduced his activity as a sculptor after 1875. He remained in Rome for the rest of his life.

In general, Ives’ style was a blend of neoclassicism and 19th-century naturalism. with subjects from both commonplace American or ancient literature. Ives satisfied his patrons’ tastes for quaintness and decorative parlor pieces but, as some critics said, he debased art in doing so. However, his appeal to the public made him a financial success. 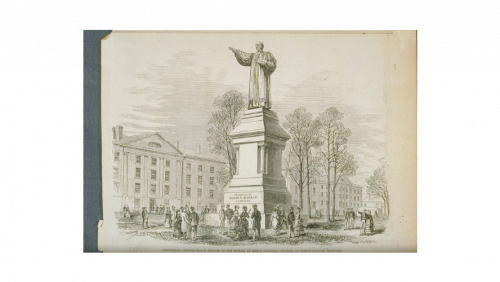 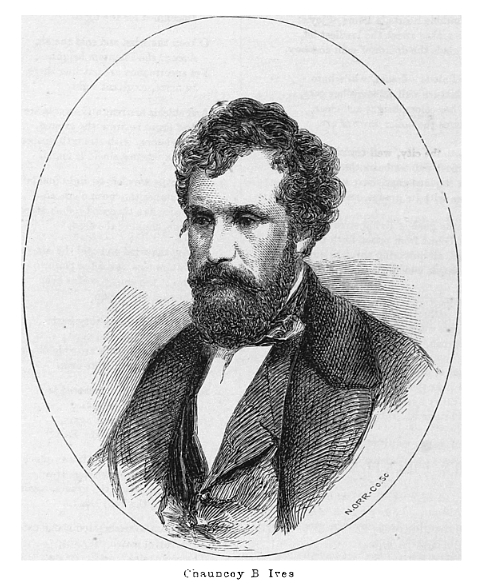 Map of Chauncey B. Ives Works