Evelyn Beatrice Longman was born to a farming family in rural Winchester, Ohio in 1874. She worked to earn enough money to move to Chicago where at age 19 she was inspired to study sculpture at the 1893 World’s Columbia Exposition. She studied at Olivert College in Michigan in 1896 and moved in 1898 to study sculpture in the neoclassical tradition at the Art Institute of Chicago, training with Loredo Taft. She completed her studies in two years and in 1901 moved to New York to be a studio assistant to Daniel Chester French. She remained with D. C. French until 1906 assisting him on the Lincoln Memorial in Washington, DC. Her first independent large-scale sculpture was Victory, 1904, which was shown at the 1904 St Louis World’s Fair on the Festival Hall building. A 1908 bronze of that male figure of Victory is today in the Metropolitan Museum in New York. She won many competitions and collaborated with the architect Henry Bacon and her mentor French on several important projects. In 1914-15 she made the gilded bronze Spirit of Electricity for the AT&T Corporation in Manhattan

In 1919, she became the first female sculptor to be a full member of the National Academy of Design and in 1920 was made a full member of the Pennsylvania Academy of the Arts. In 1918 she met and two years later married Nathanial Horton Batchelder, headmaster of the Loomis Institute (today Loomis-Chaffee School, Windsor). Their wedding took place at French’s estate Chesterfield in Stockbridge, MA. She moved to Connecticut and spent 30 years working on major commissions, including the bas-relied portrait of Daniel Chester French in the National Portrait Gallery in Washington, DC. After her husband’s retirement from Loomis, she moved her studio to Cape Cod, where she continued to work until her death in 1954. Some of her works are signed Evelyn B. Longman while others are identified by her married name as the work of Evelyn Longman Batchelder.

Longman’s 1926 Spanish-American War Memorial in Hartford’s Bushnell Park is one of her most ambitious and well-known works. Her most famous works are two sets of bronze doors, one set for the chapel of the United States Naval Academy in Annapolis, MD (1906-08) and the other for the chapel at Wellesley College (1911). Longman created three works that are in Windsor, Connecticut: The Eagle: Windsor World War I Memorial (1928) is on the Windsor Green; the Founders of Windsor Memorial is on Palisado Green and her late work, the Victory of Mercy (1947), is on the campus of The Loomis-Chaffee School. The Craftsman or Industry (1931) at A. I. Prince Technical High School in Hartford is a naturalistic image of a man representing the genius of invention and work. 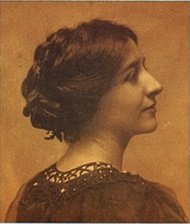 Evelyn Longman about 1904 via Wikimedia Commons