Frances Laughlin Wadsworth was born in Buffalo, New York in 1909. She was educated first at St. Catherine’s School in Richmond, Virginia and then continued her education in Europe studying sculpture.  After returning from Europe, she studied with Gutzon Borglum (1867-1941) and Charles E. Tefft (1874-1951). Frances Laughlin married Robert H. Wadsworth, an executive at the Traveler’s Insurance Company in Hartford, and an ancestor of Captain Joseph Wadsworth who was famous for his participation in the hiding of the Connecticut Charter Oak.  She executed three sculptures in Hartford: the figure group Safe Arrival in Traveler’s Plaza; Thomas Hooker outside the Old State House and Alice Cogswell (1952) on Asylum Street near the former site of the American School for the Deaf. Alice Cogswell was the first deaf pupil of Dr Gallaudet’s to learn to communicate with sign language. The two hands that lift the figure of the child form the sign for the word “light.” 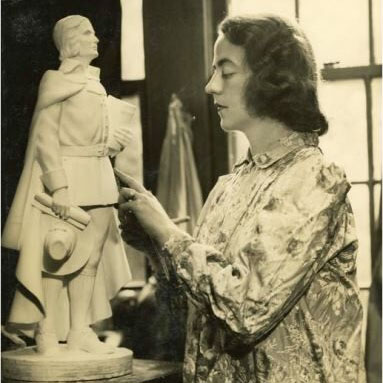