Hermon MacNeil was the single largest contributor to the Connecticut State Capitol’s sculptural program. His participation began in 1909 and continued into the 1930s. In all he executed the bronze relief medallion of Platt (1909) in the North porch; the tympana of Putnam Leaving the Plow (1919) on the North façade; all four full-length statues on the West entrance of Wolcott, Worcester, Humphreys and Ellsworth (1917); and the three full-length figures of Welles, Sedgewick and Terry on the South Wing (1934).

MacNeil is most famous for designing the Standing Liberty 25 cent coin which was minted from 1916 to 1930. He also participated in creating the east pediment on the United States Supreme Court building in Washington, D.C. with his sculpture Justice, the Guardian of Liberty.

Hermon MacNeil was born February 27, 1866 in Everett, Massachusetts where he was raised on a farm before attending The Massachusetts Normal Art School (Massachusetts College of Art and Design). He taught art at Cornell University for three years (1886- 1889) and then decided to shadow Henri M. Chapu and Alexander Falguière at the École des Beaux-Arts in Paris. There he learned how to draw and model with lively surfaces. When coming back to the United States, he went to Chicago and assisted Phillip Martiny to prepare for the 1896 World’s Columbian Exposition. He remained in Chicago and taught art at the University of Chicago. In 1896, MacNeil won a Rome Prize Fellowship and spent three years at the American Academy in Rome. In 1906, he was elected to the National Academy of Design. He served as president of the National Culture Society in 1910- 1912 and again 1922- 1924.

His first and most important work was The Moqui Runner or The Sun Vow, a bronze of two Indians created in 1896 and cast in bronze in 1897. They depict figures of the North American Navajo tribe. This served as an inspiration for his later works, including the Santa Fe Railroad Project which commissioned portraits of Hopi and Navajo 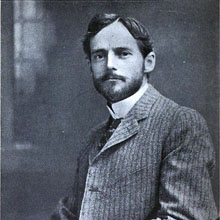