John Gregory Wiggins, also known as Greg Wiggins, started his career as an artist as a childhood amusement. Wiggins studied at the Pomfret School in Connecticut before entering Harvard University whree he was a classics scholar. He went on to teach Latin, Greek and German at St. Paul’s School in Concord, New Hampshire from 1912 to 1916.[1] Wiggins served in the US Army in World War I in France.[2]

Wiggins increasingly turned to wood carving after he returned from the war in 1919. He was particularly drawn to creating small scale work for churches and schools in emulation of the wood carving he had seen in European churches and civic buildings.[3]

Wiggins became a friend and correspondent of Trinity College President Remsen Ogilby. They collaborated over many years on the subjects that Wiggins realized in wood sculpture for the Trinity College Chapel. The first pew by Wiggins was dedicated in 1932 and he continued to create pieces until his death in 1956.[4] As a whole, the collection represents the collective memory of the College from about 1880 to 1960.[2] Inside the Trinity College Chapel are 68 pews and kneel ends that depict the life of the college, incidents from American history, and lives of people and families who have in some way been touched by Trinity.[1] Together his work for Trinity is the single largest concentration of Wiggins’ work in his distinctive archaic style. [1] 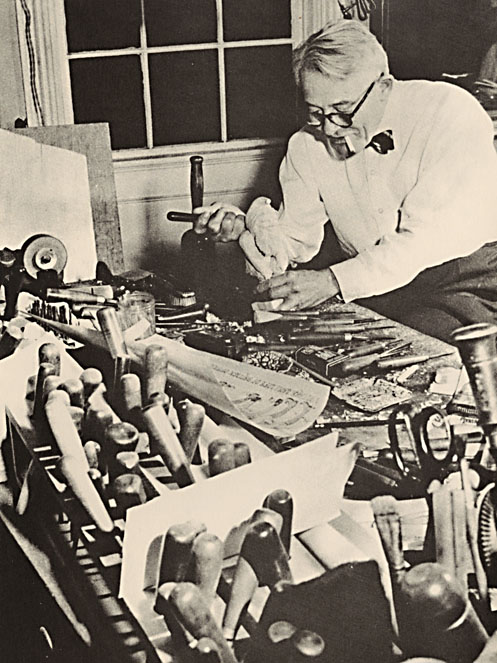