James Goodwin Batterson was an entrepreneurial Hartford-based designer, builder and quarry owner who was one of the founders of the Travelers Insurance Company in 1863. He owned and operated the New England Granite Works beginning in 1845. He also owned brownstone quarries in Portland, Connecticut. Born in Bloomfield, Connecticut in 1823, he had only a secondary education. His father had the quarrying business and was also a stone importer. Batterson traveled abroad to pursue an intense interest in Egyptology. He lived in Egypt and admired the forms of Egyptian architecture. When he practiced as a designer of monuments for cemeteries and civic spaces, he used the obelisk form. In 1857, he designed and built the General William Jenkins Worth Monument in Worth Square in Manhattan as a granite obelisk. Batterson traveled to Italy to hire stone carvers and sculptors who could help him supply Civil War monuments. Batterson formed a Hartford-based team of sculptors and architects to produce major monuments which he designed. The American Volunteer Monument, a colosal granite standing figure of Union Soldier at rest, at the Antietam National Cemetery was designed by Batterson and executed by Carl Conrads as sculptor with George Keller as architect. The Soldiers’ National Monument at the Gettysburg National Cemetery brought together Randolph Rogers as sculptor and George Keller as architect. Batterson along with Elizabeth Colt helped endow the Wadsworth Atheneum in Hartford. He also founded Cedar Hill Cemetery in Hartford where 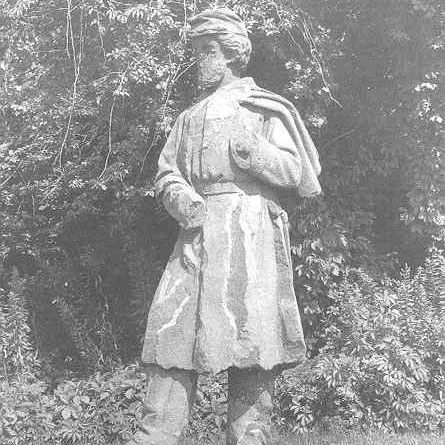 Union Soldier, Hartford, before relocation to the State Capitol