Rowan LeCompte was a nationally recognized stained-glass artist, best known for the upwards of 40 windows he created for the Washington National Cathedral in Washington, D.C. LeCompte grew up in Baltimore and drew much of his inspiration from discarded glass as well as geological visuals passed down from his elder brother in his studies as a scientist.  LeCompte used this inspiration to master the use of colors revealed by transmitted light, so that his windows presented their narrative imagery clearly in a large space. The Baptismal window at the Trinity College Chapel in Hartford and the Rose window at National Cathedral are two of his outstanding creations. 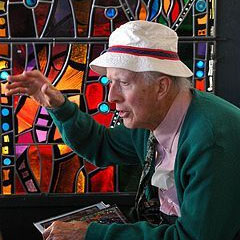