Born November 16, 1887, Philip H. Frohman was an architect who is most famously known for his work with the Washington National Cathedral, also referred to as Cathedral Church of St. Peter and St. Paul and located in Washington D.C..  Throughout the span of his life he often worked on the English Gothic Style Cathedral.  Growing up, Frohman has always had the influence in the realm of architecture and engineering from his predecessors.  This lineage began when his grandfather, Philip Gengembre Hubert, moved to America and soon designed Hotel Chelsea.  This hotel soon became a widely known residence many famous artists and musicians. From the time it was built in 1883 up until 1899, this was established as the tallest building that stood in New York.  Due to this severe influence, it is said that Frohman became interested in architecture at a very young age, both enrolling in the Throop Institute in Pasadena and even designing a house at the age of only 14 years old.

Throughout his career he is said to have designed over 50 different churches across the United States.  During World War One he was in charge of the architectural division at Aberdeen Proving Ground.  Within this position in the army he designed buildings at both Aberdeen Proving Ground and Rock Island Arsena.  Frohman and his firm was tasked with the architectural design of the Trinity College Chapel, stating that his firm was “selected because of their philosophy of church architecture, not on the basis of preliminary design.” 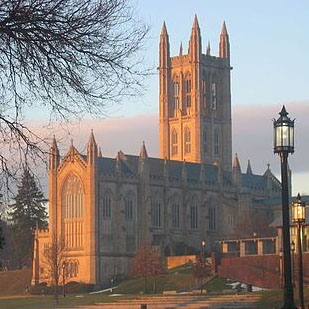