Randolph Rogers was born in Waterloo, New York. In 1843 he went to New York City and worked as a clerk in Stewart’s Dry Good Store until 1848. During that time, he took up modelling portrait busts. In 1848 he went to Italy to study for three years in Florence and two years in Rome, where he worked on his well-known statue “Nydia.” In 1853, upon his return to the United States, he received a commission to make bronze doors dedicated to Columbus for the United States Capitol. In 1855 he moved to Rome where he worked for the remainder of his life.

Rogers did not limit himself to one style. When creating portraits and war memorials he often worked in a naturalistic manner. For other works he used the romantic neoclassical style. Some of his other works are the Michigan Soldiers and Sailors Monument, Detroit (1881) and Thomas Crawford’s unfinished Washington Monument, Richmond, Virginia (1861) to which he added two works of his own: Andrew Lewis and Thomas Nelson, as well as allegorical figures and ornaments. Before his death, Rogers shipped the casts of most of his works to the University of Michigan. 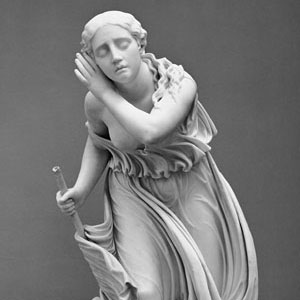 "Nydia" one of Randolph Rogers' most famous Neoclassical sculptures