Sol LeWitt (1928-2007) was born in Hartford, Connecticut where he took art classes at the Wadsworth Athenuem while growing up.  He received a BFA from Syracuse University in 1949.  LeWitt moved to New York City in 1953, where he set up a studio on the Lower East Side.  In 1955, he served as a graphic designer at the architecture firm of I.M. Pei for a year and took a job as a nigh receptionist at the Museum of Modern Art, where he developed many connections in the modern art word.

LeWitt is considered the “The Father of Conceptual Art”.  What defines conceptual art is that the idea or concept behind the piece is the most important aspect of the work.  LeWitt sought to redefine art under the premise that artistic creativity was rooted in the conception of a piece, rather than its execution.  He developed these ideas while working while working under I.M. Pei, where he noted that although architects do not construct their plans they are still considered to be the “artist” behind the project.  LeWitt is famous for his wall drawings which he first began in 1968.  LeWitt draws up diagrams and guidelines for these projects and they are typically executed by his assistants or volunteers.

Hartford is lucky to have many Sol LeWitt works. Most are in institutions, notably The Wadsworth Atheneum. At Trinity College, his 1998 Wall Drawing #849: Irregular Blobs of Color is publicly accessible in the Vernon Social Center, Vernon Street, Hartford. 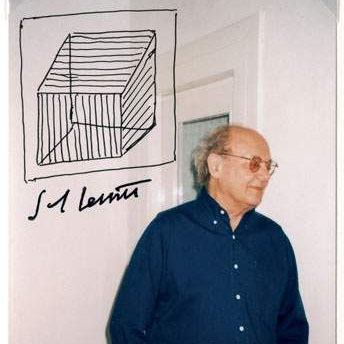