TRUMAN HOWE BARTLETT (1835 – 1922) was a Boston-based critic, sculptor, teacher, and author. His studio at the Massachusetts Institute of Technology, where he taught for 23 years, produced several fine students, among them the sculptor’s son, Paul W. Bartlett (q.v.) and Herbert Adaro (q.v.).  He studied with Robert Eberhard Launitz in New York before traveling abroad to Paris, Rome and Perugia. T.H. Bartlett is best known today as the author of The Art Life of William Rimmer, 1882.

Hartford’s statue of Dr Horace Wells was made by T.H. Bartlett when the artist was only 30 and remains the best known of his works. Bartlett was a technical innovator among American sculptor’s working abroad and ran a free school for the poor boys and girls in Boston to teach modeling and drawing. He married Mary Ann White in Chesire, Connecticut in December 1861 and their son, Paul Wayland Bartlett, was a prominent sculptor in his own right. 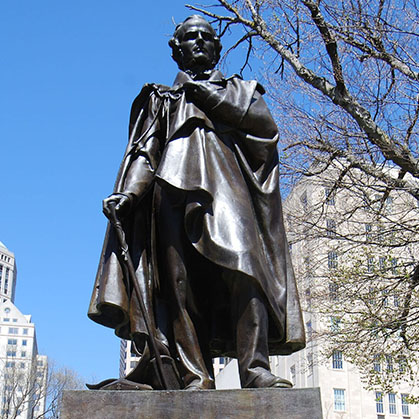