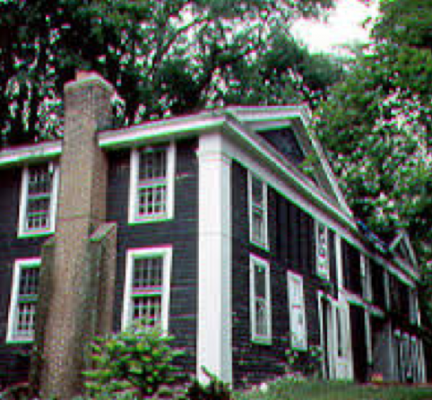 La Amistad was a two- masted schooner boat owned by the Spanish. In 1839, the ship became renowned by Mende captives to be transported to the slaves’ purchaser’s plantations.[1] The slaves aboard La Amistad killed most of the crew and tried directing the ship toward Africa, to avoid becoming slaves for the rest of their lives. A few Spanish crew members lived and secretly maneuvered the ship north, where the ship was then captured off the coast of Long Island by the USS Washington. While federal court proceedings were in session, the Mende slaves and La Amistad were kept in New Haven, Connecticut.

A national committee was formed to assist their defense. Members included Lewis Tappan, Joshua Leavitt and Simeon S. Jocelyn.[2] Twenty years before the start of the Civil War, there was a “turning point in the attitude of townspeople toward slavery” and “toward the South” in Farmington, CT.[3] Incarcerated for eighteen months in New Haven, the Amistad Africans were brought to Farmington after being released on March 18, 1841. The national committee thought Farmington would be an ideal place to house the men because it was a “quiet rural town where blacks could be inexpensively housed and educated”.[4] Farmington was also a community where “abolitionists constituted a forceful element of the population”.[5]

Altogether the thirty- eight Amistad Africans stayed in Farmington, CT for eight months in 1841, which lead to the experience of “great importance in the development of the abolition cause”.[6] The main goal to housing the Amistad Africans was to “restore this absurd race to their natural rights and to give them the benefits of cultivation and Christianity” as member of Farmington at the time, John Treadwell Norton commented.[7]

Townspeople opened up their houses and shops to host the Amistad people. Samuel Deming arranged a temporary quarter for the men on the second floor of his new store at the corner of Main Street and Mill Lane.[8] The three young girls stayed in the homes and families of Timothy and Horace Cowles and Reverend Porter. Called the “Three Farmington Men”, John Treadwell Norton, Austin Francis Williams, and Samuel Deming, were all responsible for the Amistad Africans and “overseeing their care”.[9] A communal barn was made into a dormitory for the Amistads and “served as the primary home for African men during the rest of their stay in Farmington”.[10] To this day it is still standing and called the Austin F. Williams Carriage house.