You are at stop #4 on the Civil War tour 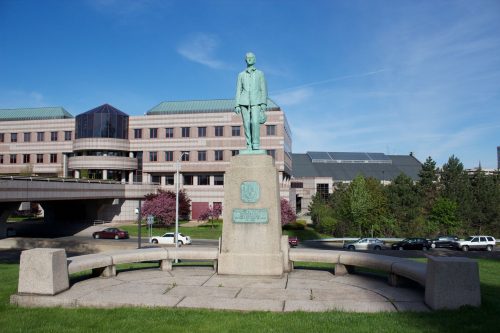 The monument was proposed by George Q. Whitney and sculpted by Bela Pratt, a native of Connecticut. A committee was appointed to submit an appropriate design for the memorial to the legislature. The committee chose a prominent Andersonville location in May 1906. Pratt’s model was approved and cast in September 1907. On October 14th, 1907, a group of Connecticut veterans and officials went to Georgia by train to witness the unveiling. At the same time, a second cast was made and placed on the grounds of the Connecticut State Capitol in Hartford.

The Hartford version is accompanied by radiating benches that form a small garden of memory and repose. The plan for the pedestal and benches was designed by R.C. Sturgis, architect, of Boston, Massachusetts. The statue was cast by the Henry Bonnard Bronze Company, Mount Vernon, New York.