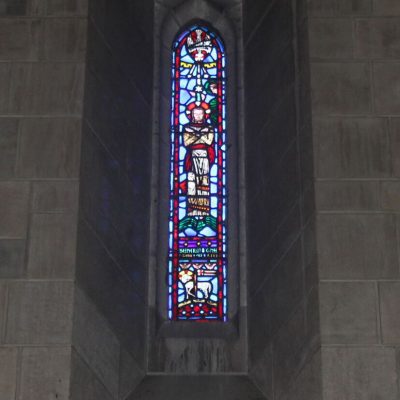 At the age of 17, Rowan K. LeCompte visited Trinity’s Chapel in 1942 and submitted a design for a window. His design depicted a baptism of Christ in a lancet window, which was commissioned and installed rather quickly as LeCompte faced the draft on his 18th birthday in 1943. This window is found to the left before the entrance of the Chapel of Friendship.

The window itself depicts Christ standing with his arms crossed over his chest, while his eyes are closed. Above him is a white dove, likely representing the Holy Spirit, showering down rays of light on top of Christ’s glowing head. A winged angel watches the scene from the side of the window. Under Christ is a lamb with a halo around its head, and carries a flag in his hoof.