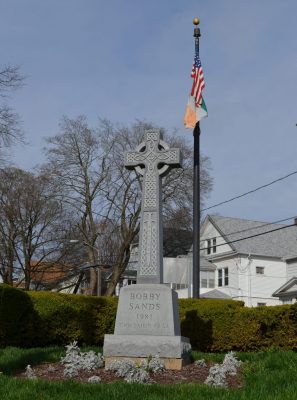 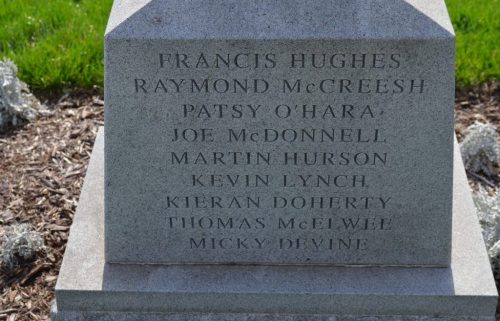 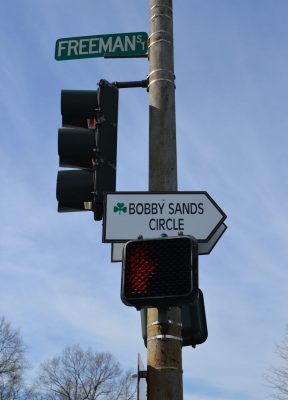 The Bobby Sands Memorial Cross was erected by the Irish Northern Aid Society and Richard P. Lawlor, Esq. in May, 1997. It commemorates the death of 27 year old Bobby Sands on May 5th, 1981. Sands died of starvation due to the hunger strike he underwent. He was the first of ten jailed Irish Republicans to die in a hunger strike that won status as political prisoners from the British government.

The granite monument was designed and carved by John W. Scott of the High Cross Monument Company, a Texas firm specializing in the carving of Celtic crosses. It was installed by S.L. Zocco Memorials, Inc of Bloomfield, CT and dedicated in May 1997. It consists of a traditional Celtic cross measuring 90” tall by 24” wide by 7.5” thick. The base of the monument is engraved with Bobby Sands, 1981, the names of the other nine hunger strikers who died that year, plus two other Irish prisoners who died on hunger strike in the mid 1970s. A sign at the intersection reads, “Bobby Sands Circle” in the style of directional road signs in the Republic of Ireland. The circle has a flagpole where the United States flag and the tricolor flag of Ireland are flown.

View additional details to the right.