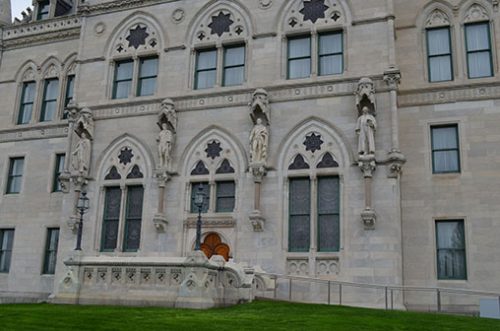 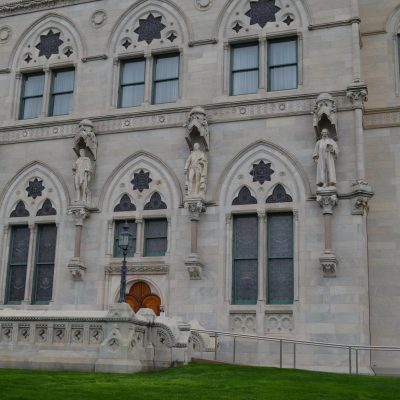 The west façade is a representation of the individuals who distinguished themselves for government service during the Revolutionary War. The West elevation is the simplest with no tympana or portrait medallion but only four full-length figures in niches. All four figures were sculpted by by Hermon MacNeil in or about 1917. It’s four statues, read from left to right, are: Oliver Wolcott (1726 -1797), signer of the Declaration of Independence from South Windsor,; David Humphreys (1752- 1818), personal friend of Geoge Washington and his secretary during the Revolution; David Wooster (1710- 1777), the third highest ranking general in the general of the Continental Congress, he died of his wounds fighting the British at Danbury, CT in 1777; Oliver Ellsworth (1745- 1807), born in Windsor, CT, he was a member of the Continental Congress, helped draft the preamble to the Consitution and was the third Chief Justice of the United States Supreme Court.