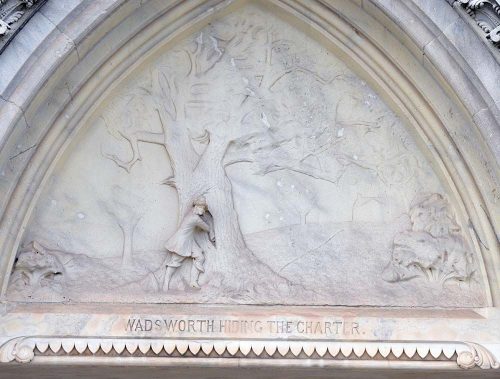 In 1662 John Winthrop Jr., the fifth governor of the Connecticut Colony, traveled to England to secure from King Charles II a Royal Charter which would give the Colony a legal basis for self government. Upon the death of King Charles in 1685, his brother James II became the new king of England. Deciding to consolidate the New England colonies, he sent the Royal Governor Sir Edmund Andros to Connecticut in 1687 with instructions to revoke the Royal Charter. During the meeting between Andros and the colonial Officials where the matter was being argued, Captain Joseph Wadsworth managed to remove the Charter from the room and hide it in an old oak tree. Brooks’ relief sculpture celebrates Wadsworth’s deed: the colonial hero is shown hiding the Royal Charter in the Charter Oak.