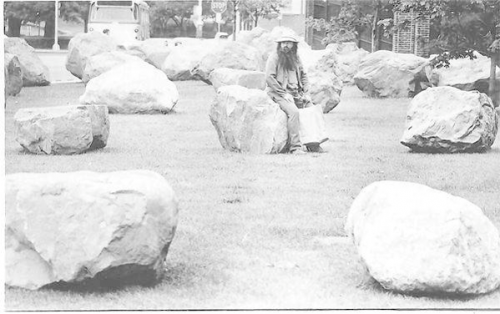 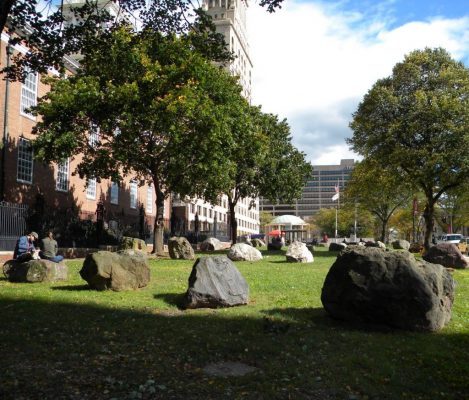 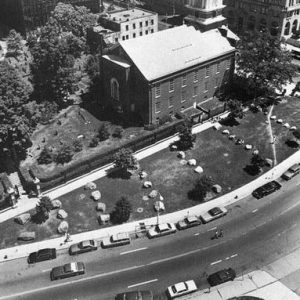 Carl Andre’s Stone Field sculpture is a triangular arrangement of thirty-six boulders of varying material in eight rows placed on a sloping site in the heart of the city. The conception for this site sculpture is two-fold. On the one hand, its formal arrangement was inspired by the tombstones in the adjacent Center Church Cemetery and Andre’s visit in 1954 to Stonehenge and other megalithic monuments in England including Carnac on the Brittany coast. Through these references, it is thought that Andre is hinting at the ephemeral quality of human existence versus the solidity and endurance of nature. On the other hand, Stone Field is designed and executed to remind us of New England’s once glaciated landscape and the subsequent agrarian life style. The one to nine ton rocks are massive, stable and durable which Andre found befitting for an insurance capital such as Hartford.

Stone Field was constructed on August 22, 1977. The thirty-six rocks are arranged in eight parallel rows of increasing length on a 290’x53’ lawn. The boulders of sandstone, brownstone, granite, schist, gneiss, basalt and serpentine are carefully arranged so that no two adjacent stones are of the same color and texture. The largest boulder is placed at the apex of the triangle, which is also the lowest point on the site, and is followed by progressively smaller stones positioned in progressively longer rows. Subsequently, the base of the triangle is comprised of the eight smallest rocks placed on the highest point on the site. Furthermore, the distance between the rows becomes increasingly large towards the base of the triangle. This gives the viewer who is sitting on the low rocks the same effect as looking through a telephoto lens because the area becomes spatially compressed. Stone Field is playful in this way and Andre invites the public to explore and relax within his work. As the sun moves, the shadows shift and change the character of this sculpture.

Andre received the commission for the Stone Field sculpture from the Hartford Foundation for Public Giving and the National Endowment for the Arts. It is important to note that this work has been controversial ever since it was completed. David Bourdon, writing for the Arts Magazine (52: 5 D’ 77 p. 5) says that “Stone Field is an unusually commanding site sculpture and Hartford is fortunate to have it.” George Athanson, major of Hartford at the time of the commission, was cited in this same article saying that he believed that Andre was coming back to sculpt the rocks. When Athanson found out that the sculpture was already complete he said, “I think he chiseled the city.”

Along Gold Street between Main Street and Bushnell Park, Hartford, CT, diagonally across from The Wadsworth Atheneum