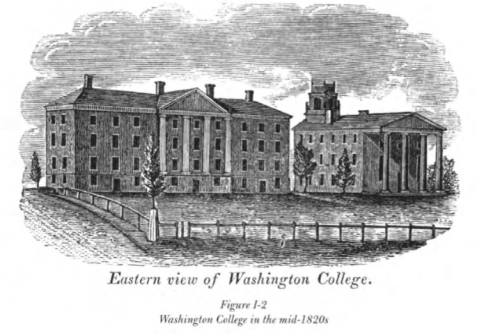 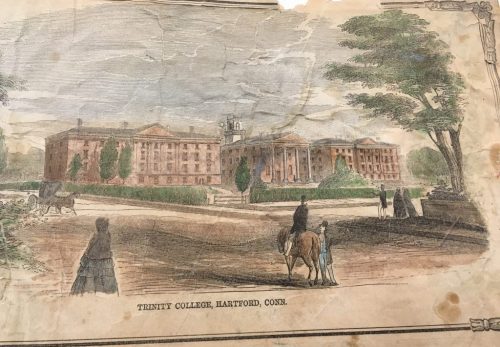 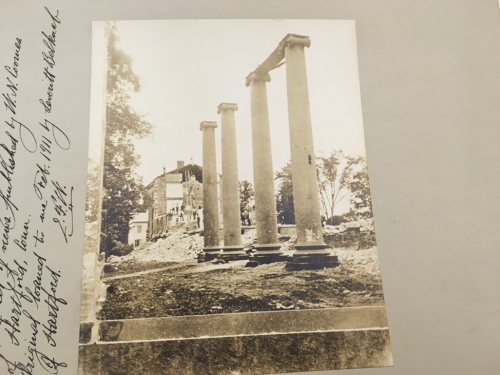 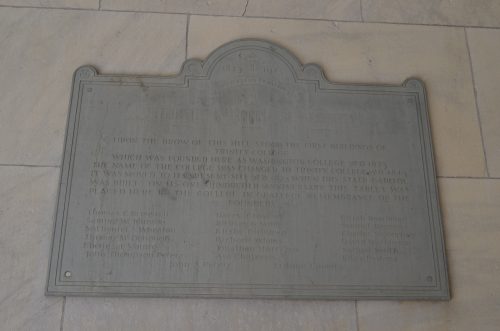 The original campus of Trinity College (known as Washington College until 1845) was on a fourteen-acre tract of land just outside of downtown Hartford. By the mid 1850s, Hartford had expanded, making the Trinity campus a more central feature of the city. The ‘College Hill’ campus, as it was known, was initially made up of two Greek Revival-style structures called Jarvis and Seabury halls. Seabury was a three story building that contained the chapel, mineralogical cabinet, philosophical chambers, laboratory, recitation rooms, and library. Jarvis was a four story structure that housed the dormitories for students and faculty. Later Brownell Hall was added to the campus, north of Seabury. Washington College was founded by several Episcopal clergymen, as a response to religious exclusion from Yale University which was Congregationalist at the time. The Connecticut General Assembly granted the school a charter in 1823. Bishop Thomas Brownell, the college’s central founder, oversaw the construction of the buildings and the location choice in central Hartford. Under his leadership, the College Hill Campus was completed in 1825.

In 1872, the city of Hartford persuaded Trinity’s trustees to relocate the campus, in order to settle a dispute between Hartford and New Haven. The cities of Hartford and New Haven had been dual state capitols in the early years of Connecticut’s statehood. In 1869, the two capitol system was deemed redundant, prompting New Haven and Hartford to compete for the role of Connecticut state capitol. To present a more attractive bid for the position, Hartford decided to offer the state a new capitol building in the center of the downtown area. The city thought the College Hill campus to be the ideal spot, and in 1872 offered a sum of $500,000 for Trinity’s relocation. Trinity faculty and students were vehemently against the sale of the campus grounds. According to a Tablet article (the school’s newspaper at the time during the time of the negotiations, the general consensus was that, “…all the Faculty, and we know by far the greater number of undergraduates are opposed to selling.” However, in 1872, Trinity was not financially secure at the time, actually being in danger of falling into debt by the end of that same year. In the interest of fiscal responsibility, the college accepted the city’s increased offer of $600,000.

After the sale was finalized, Trinity’s trustees needed to decide where the new campus would be located. Some alumni pushed to have the campus moved to New York City, and others advocated for a location in New Haven. To find a suitable location, President Abner Jackson sought out the assistance of notable landscape architect Frederick Law Olmsted. Olmsted advised Jackson to find an area that would allow the college room to grow, should the student body size increase. With this in mind the President and the campus planning committee settled on the ‘Rocky Ridge’ campus in Hartford roughly one mile south of the College Hill campus. See the entry for Trinity College Rocky Ridge campus.