You are at stop #6 on the Civil War tour 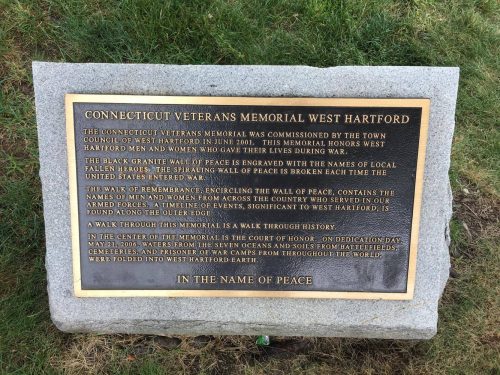 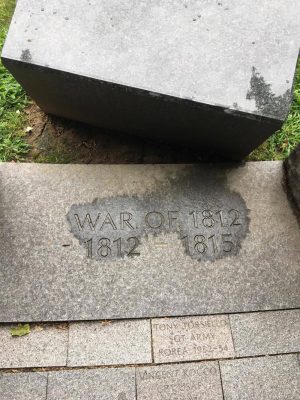 The Connecticut Veterans Memorial in West Hartford is dedicated to all Armed Services members who served in America’s wars from King Philip’s War (1675) to the 21st Century Global War on Terror. The monument was designed in 2002-2003 by Vincent Stryeski of Kaestle Boos Associates, New Britain. Stryeski and a group of summer interns at Kaestle Boos entered the open competition for the monument and won the commission.

The commission was given by the Town Council of West Hartford and the West Hartford chapter of the Connecticut Veteran’s Association was deeply engaged in the design process. The Connecticut Veteran’s Memorial is constructed of polished black granite blocks arranged in a circle with a lawn in the center. The monument is a circular timeline in which wars are marked by blocks which disrupt the perfect circle. It is said to be “a sculptural expression of time and emotion that commemorates the history of all wars”. The names of West Hartford natives who lost their lives in combat are engraved on the Wall of Peace.

Encircling the Wall of Peace is the Walk of Remembrance, which contains the names of the men and women from across Connecticut who died in service in the Armed Forces. On the outer edge, there is a timeline of events, significant to West Hartford. This walkway has the names of veterans who served their country carved into the solid granite. Leading past the Wall of Peace is a green lawn providing visitors a space for reflection and peace. The center of the memorial is not only a place for reflection, but also serves as a court of honor. On the memorial’s dedication day, May 21, 2006, soils from battlefields and waters from the seven oceans were folded into the green lawn.