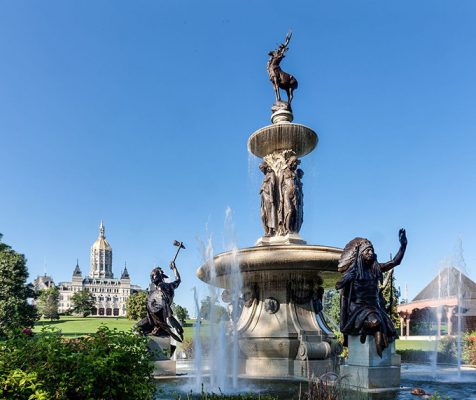 Corning Fountain was built by John Massey Rhind to commemorate a Hartford merchant, John J. Corning. Charles Dudley Warner, chairman of the Public Architectural Monuments Commission, headed the project. Letters from Rhind to Warner are preserved in Trinity College’s Watkinson Library. In them, Rhind presents his program to Warner for “Indian” representation on the fountain. Rhind chose the Saukiog Tribe, native of central Connecticut, as his subject.

Four Native American warriors on pedestals are placed around a large marble basin. On the second level, four freestanding Native women decorate a column surmounted by a hart, the symbol of the City of Hartford.

It is Rhind’s intent to show various stages in the cultural evolution of the Native American. The first figure is the Hunter dressed in the appropriate hunting garb, including a mask to shield human scent. Next, the Scout scans the horizon. The third Native, the Warrior, lifts his tomahawk defending his tribe. The fourth figure in this pictorial cycle is the Peacemaker. The Native chief is draped in his feather headdress, holding a peace pipe, lifting his hand asking for peace.

Another version of the Peacemaker exists as a freestanding independent sculpture in Philadelphia at Indian Rock. Rhind’s interpretation of the Native American in sculpture has an important place in the history of American sculpture.

View additional information to the right.