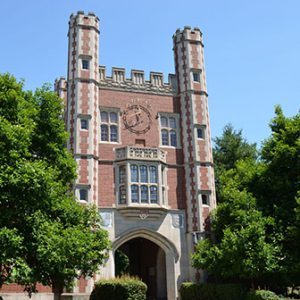 Built in 1958 as a donation by late trustee Louis W. Downes, the Downes memorial connected the recently built Chapel to the Williams memorial. The gothic style clock tower as a meeting room for the board of trustees and for administration since its completion. The gothic style is closely matched up with that of its adjacent counterpart, The Long Walk. The clock tower is built from red brick with limestone finish rather than the brownstone used in Burges’ Long Walk. Underneath the archway lies a brick walking path where the inscription lies on the right wall.

Louis W. Downes was an alumnus from the class of 1888, who was always a very generous donor to Trinity College. He was a world-renown inventor with over 35 patents granted to his name. So after his death, in his memory, the Downes memorial was donated to fill in the gap between the Williams Memorial and Chapel.

In his work, Willis either followed a gothic or a medieval architectural style. In the Downes Memorial, it is clear that he follows his own pattern and the school’s history with a gothic build. The building of the Downes Memorial was one of the last builds of Willis’ career before his company shut down and he died a few years later. This build was not one of the greatest of his career, but it a remarkable piece just like all of his others.

In the 1950’s Willis’ company was based out of New York City. Being there he was only about two hours away and could drive up at any time to keep and eye over his project. In regards to the location of where the project was being built, there was a gap that needed to be filled. Originally constructed in 1914, the Willams Memorial was attached to the Long Walk. Then eighteen years later the chapel was built across from it, with a gap in the middle of it. This is where the administration and trustees would choose to build a memorial clock tower some twenty-six years later. The administration wanted the building to follow the same pattern of a dark look on the building with a light trim, so Willis followed that exactly. Since the time of being built, the Downes memorial has not gone under any major restoration or work.

Being a walkway that student and faculty use every day, the Downes Memorial is sometimes regarded as “just another building.” It is a simple building but its walls are filled with rich history. Not to mention it’s builder and his company had built some incredibly famous things before coming up to Hartford to build this amazing building.