You are at stop #6 on the American Revolution, Hartford tour 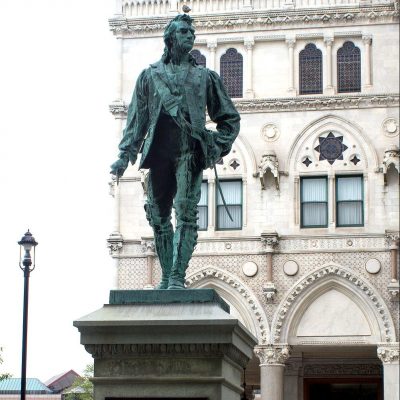 Enoch Woods’ conceived of Colonel Thomas Knowlton as a companion piece to the Nathan Hale statues, one by Karl Gerhardt in the Capitol lobby and his own outside The Wadsworth Atheneum. Hale was one the “Knowlton Rangers” in the Revolutionary War. This work was commissioned by the General Assembly of 1893 in memory of the Colonel who was killed at the Battle of Harlem Heights in 1776. Even though the General Assembly did not award Woods the commission for his Nathan Hale, it did give him this project in 1893. The statue was dedicated in 1895.

This idealized representation of Col. Knowlton is approximately 8 feet high. It is the only known version. The statue was cast by M.H. Mosman in Chicopee Falls, Mass. Woods modeled the statue after the portrait of Col. Knowlton by John Trumbull, Jr., 1785.