You are at stop #4 on the Women Artists tour

Gallaudet Memorial at Original Site of American School for the Deaf 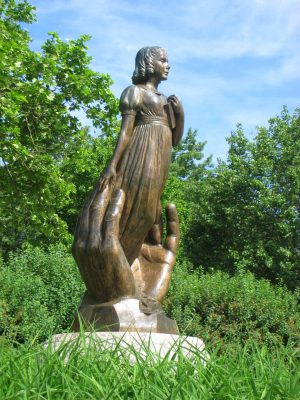 Frances Wadsworth was commissioned by the National Association for the Deaf to create a statue which commemorated the founding in 1817 of the American School for the Deaf, the first institution for the education of the handicapped in the United States. The school was originally called the Connecticut Asylum for the Education and Instruction of Deaf and Dumb Persons and was located at the present site of the Hartford Fire Insurance Company on Asylum Avenue, named after the school. The American School for the Deaf subsequently moved to West Hartford. (See entry for Daniel Chester French).

Honoring the founders, Thomas Hopkins Gallaudet, Mason Fitch Cogswell, and Laurent Clerc, the inscription reads: “Dedicated by the New England Gallaudet Association of the Deaf to express the gratitude of the deaf of the nation.”

The nine foot statue is of two large hands which cradle a young girl, Alice Cogswell, daughter of Dr. Mason Fitch Cogswell, and the school’s first pupil. The statue operates on different levels of symbolic interpretation. The hands protect the child as the institution protects the handicapped. Forming the word “light” in the deaf sign language, the hands thereby project the optimism of Gallaudet’s contribution. Both hope and knowledge are implied not only for the students of the school, but for all deaf.

Inscriptions: “Dedicated by the New England Gallaudet Association of the Deaf to express the gratitude of the deaf of the nation.”