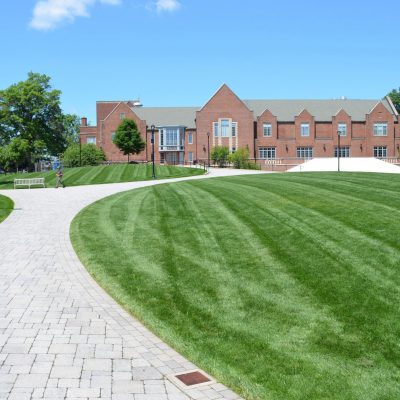 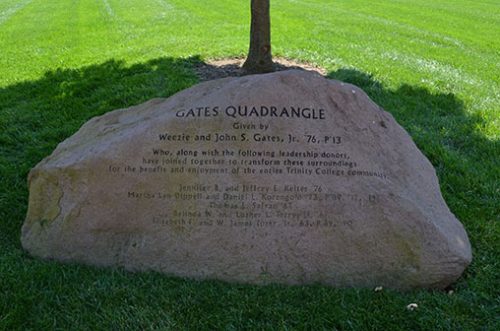 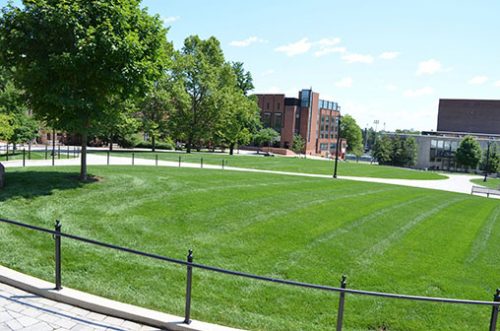 The five large mounded lawns of the Gates/ Mather Quadrangle, designed by Chicago- based Hoerr Schaudt Landscape Architects, have a combined path network that helps direct the heavily trafficked landscape as well as creating convenient areas for students and faculty to gather. Being the heart of the 100- acre campus, Mather Hall, Clement Chemistry Building, Raether Library, the Information Technology Center, the Austin Arts Center, Halden and McCook Halls, and Jones Residence Hall Surround Gates/ Mather Quad. The quadrangle includes an improved Mather Cave Patio and the entry into the Austin Arts Center. At the Cave, the patio was converted into a more rounded shape, surrounded by a sloped lawn, mimicking an informal amphitheater for college events and informal gatherings. The new design includes the gateway enters at the south side of Mather Hall with a small drop-off loop. The now planted areas and improved paving and the newly energy efficient LED lights, illuminating the paths, create a welcoming entry into the quad from Summit Street.

The Gates/ Mather Quadrangle was a $2.65-million-dollar project, donated by John Gates Jr, who graduated from Trinity College in 1976 and is currently the chairman of the Chicago Regional Transportation Authority, which is the second largest public transportation system in North America. Other leadership donors who contributed and made the Gates Quad project possible were Martha Lyn Dippell and Daniel L. Korengold ’73, P’09, ’12, ’14; Jennifer B. and Jeffrey E. Kelter ’76; Thomas L. Safran ’67; Belinda and Luther L. Terry ’67; and Elizabeth F. and W. James Tozer ’63, P’89, ’90. Chairman of the Board Paul E. Raether ’68, P’93, ’96, ’01 made special acknowledgement of the Facilities Committee of the Board—especially the leadership of Chair Luke Terry and member Karen Kelsey Thomas ’78, P’12, whose ardent support and diligent work contributed greatly to the success of the project.

Hoerr Schaudt being an influential team of landscape architects and urban designers, designed the Mather/ Gate Quadrangle, which was a three-month project, created in 2012. Today this quadrangle has a huge impact on the Trinity College campus, students and faculty. Hoerr Schaudt are urban landscape architects, which is why Trinity College was the perfect projects for them. Hoerr Schaudt is Chicago based, which is why all of the designing was done in the City of Chicago Illinois.