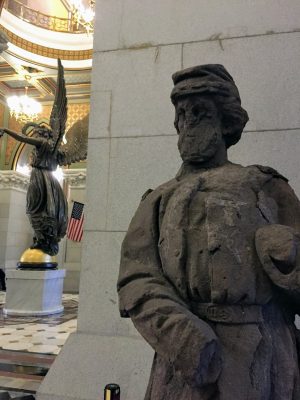 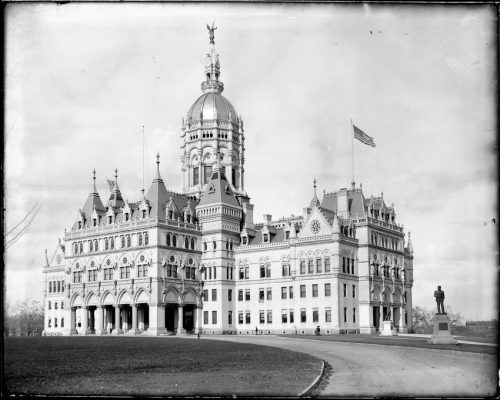 The Genius of Connecticut by Randolph Rogers (1825-1892) is an allegorical winged female figure personifying the State and was made to adorn the topmost lantern of the State Capitol dome in Hartford. She was crowned with oak leaves, the emblem of strength. With uplifted arms she extended wreaths of Laurel in her right hand and of Helichrysum or Everlasting flower in her left hand. The Genius stood seventeen feet, eight inches tall, exclusive of the wings, and weighed sixty-six hundred pounds. It was created by Rogers in his studio in Rome and cast in bronze at the Royal Foundry in Munich, Germany in 1878. The original bronze Genius was designed in a delicate balance unequal to the fierce winds which assailed her two hundred and fifty feet above Bushnell Park. On October 6, 1938, following the great hurricane, the Genius became unstable and swayed dangerously. Governor Robert A. Hurley ordered it removed by the Works Progress Administration. Four years later in 1942, during World War II, it was melted down for armaments.

Fortunately, Rogers, presented the original plaster model of The Genius of Connecticut as a gift to James G. Batterson (the builder of the State Capitol), in 1878 when the full size bronze was hoisted into place atop the dome. Upon arrival, the plaster model was found to be extensively damaged, so it was repaired before being placed in a niche of the west hall, where it remained for ninety-four years. In 1971 Governor Thomas Meskill discovered it and decided to have it restored in time for the bicentennial. He placed Edward J. Kozlowski in charge of the restorations. Kozlowski commissioned Casimir Michalcezyle, a Glastonbury sculptor, to do the necessary restoration work. On April 26, 1973 the restored plaster model was placed in the Rotunda of the Capitol and a fiberglass replica of The Genius of Connecticut was made. As of this writing the fiberglass replica has not been placed atop the cupola to recreate the original appearance of the completed Capitol.

View additional information about the sculpture to the right.