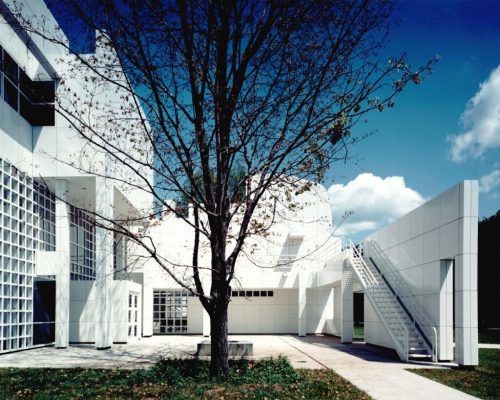 In the late 1970’s the Hartford Seminary Foundation needed to downsize from a campus to a single building where they would be able to offer advanced degrees to clergy in Protestant Studies while preserving their important library assembled by former students who had been missionaries around the world. They sold their old campus, now the University of Connecticut Law School, to move to their present campus. John Dillenberger, then Director of the Seminary called in the daring architect Richard Meier to design a building that would house all of their needs. In a neighborhood of gothic revival houses, the Hartford Seminary’s grid-like glass and white tiles stands out as one of the most purist modernist buildings in Hartford. The building was intended to be used to house the studies of laypersons and clergy. The building includes a library, chapel, large meeting rooms, classrooms, and offices for faculty. The Seminary building underwent restoration in 2014 to clean up the outer porcelain panels.

Generally ignored locally, Meier’s use of white colors and light throughout the building is an early precursor of the pure geometry and emphasis on natural light that would be translated into quarried stone and glass at the Getty Center in Los Angeles (1988-1997). The Hartford Seminary building reflects Meier’s signature early designs for the New Harmony Indiana Atheneum (1979) and the High Museum of Art (1983).