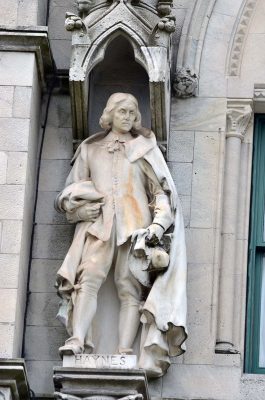 After the completion of the State Capitol building in 1878, the Connecticut State Commission of Sculpture named Richard Brooks, Paul Wayland Bartlett and Albert Entress as the sculptors who would create the works for the north front.  Brooks contributed two full figure statues, one of John Haynes and one of Roger Ludlow, and a tympanum of Wadsworth Hiding the Royal Charter.

John Haynes (1594-1654) became the first governor of the Connecticut Colony after he migrated to Hartford from Essex, England in 1637.  From his pedestal, he appears to be looking down over the landscape, his serious, contemplative, humanistic face reflective of the ideals of the newly formed colony he governed.  Brooks’ fluid treatment of the drapery, especially in the cape and sleeve, is particularly beautiful.