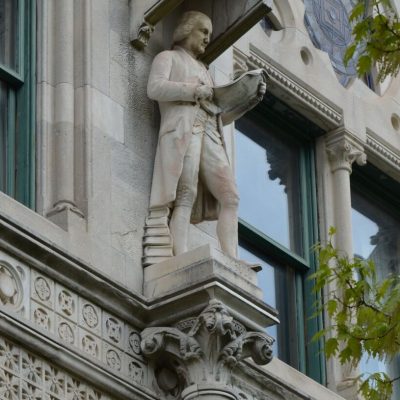 Jonathan Trumbull by Chauncey Ives is a seven foot marble statue commemorating an outstanding Connecticut historical figure. Trumbull (1710-1785) was a noted soldier, and statesman and figured prominently in Connecticut commerce. He was Governor of Connecticut from 1769 to 1784. Trumbull’s advocacy of independence from England and his fight for the colonial cause won him a niche in the scheme of the east façade of the Capitol celebrating the state’s history and citizens who were active in the Revolution and early Nationhood of America. The Trumbull was the first of the figure sculptures to be put in place in the Capitol’s twenty-six niches. The statue was in place by March of 1878.

Ives portrays the figure in a casual stance wearing colonial attire. The stack of books behind Trumbull and the paper he reads depict him as a learned man. However, the statue becomes a costume piece in that Ives renders the buttons and ruffles of the clothing more successfully than the proportions of the body.

The work is practically identical to the earlier Trumbull Ives produced in 1869 for the Statuary Hall in the National Capitol in Washington, D.C. Both versions were produced in Rome but Ives portrays the earlier Trumbull in a full length cloak. The Washington statue is about a foot taller. Both versions provide evidence of Ives’ difficultly in portraying the full figure proportionally.