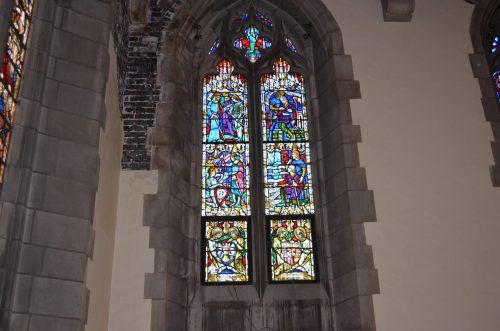 Found closest to the altar on the right side, opposite the Roland and Oliver; Virgil and Dante Windows.

Before his death, Earl Sanborn completed rough sketches of the windows with the theme, “Friends and Literature”. Two artisans who worked with Sanborn on many projects, Francis Gates and C. L. Gately, completed the design and construction of the windows in 1937. The left window is the portrayal of the friendship of Lancelot and King Arthur. This window was donated by William Mather to Trinity as a scholarship for Ted Sanborn, Earl’s son.

On the other window, characters from William Shakespeare’s Hamlet, Hamlet and Horatio, are seen together in the center panel. They both see the ghost of the murdered king of Denmark and Hamlet faints into the faithful arms of his friend.