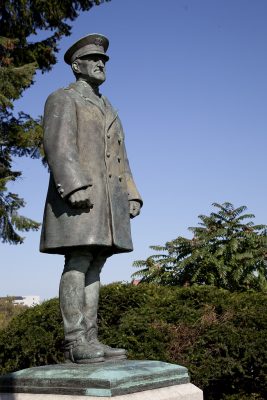 Major General Clarence Ransom Edwards was the commanding officer of the 26th Yankee Division from Connecticut for the majority of the United States involvement in World War I. After serving in the military, he was promoted to the Chief of the Bureau of Insular Affairs. After his death in 1931 he was buried in Arlington National Cemetery. This sculpture by George H. Snowden is a robust bronze mass, but all the elements of the general’s figure–his skin, jacket, pants, and boots–have a smooth, unarticulated texture. The sculpture was completed and installed in 1942.