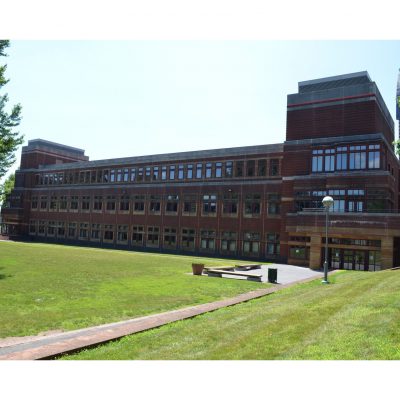 Located on the perimeter of the southern academic quadrangle of Trinity College’s campus in Hartford is the Roy Nutt Mathematics, Engineering & Computer Science Center. The building was originally named the Mathematics, Computing and Engineering Center, and was designed by the architects at Pelli Clarke Pelli, a firm based out of New Haven, CT. Pelli Clarke Pelli was founded by Argentinian-born architect, César Pelli, in 1977. The building is of a rectilinear structure with two end towers and four stories of laboratories, classrooms, seminar rooms, faculty offices and lounges, each end with an entrance pavilion. The building fits into Trinity’s 19th century part of the campus by resembling a building by William Burges, the Long Walk. The windows of the MECC are patterned with an outline of sandstone surrounded by a brick field, matching the limestone and brick of Seabury and Jarvis. This was done in order to reinforce the architectural context at Trinity, but also maintain contemporary function.

The $9.9-million academic facility was completed in the Spring of 1991, as part of the three-year, $50-million Campaign for Trinity. The construction of the building supported the national goal at the time to achieve world-class mathematics and science education by the year 2000. It was predicted by experts that by 1996 there will be 45,000 fewer students with bachelor’s degrees in math and science than this country will need to maintain its present economic status. Even at Trinity, the combined number of students majoring in math and science had peaked at 118 in 1987 and by 1990 had slipped to 59, the lowest total in the last 13 years.