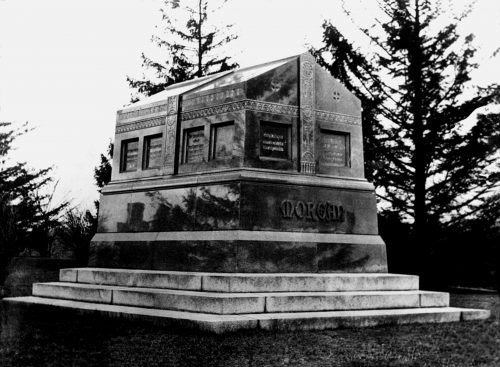 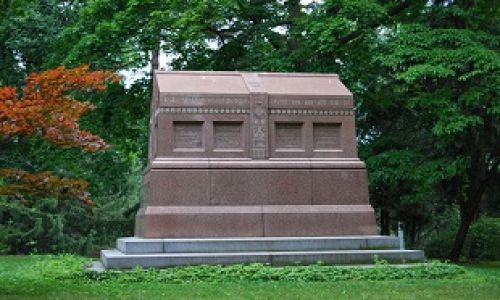 J.P Morgan’s family monument was designed by architect George W. Keller who also designed the Soldiers and Sailors Memorial Arch in Bushnell Park. The Morgan family monument was originally made to mark his father Junius Spencer Morgan’s burial site. It is made of red Scottish granite and embodies J. P. Morgan’s vision of the Ark of the Covenant. The family marker is 10’ high, 12’ long, and 8’ wide and is structured in a rectangular shape with a gabled roof. One end of the monument has the family name, “Morgan”, and on the other side, detailed inscriptions about each family member are engraved. The various family members have separate small monuments around the family monument. The headstone for J. P. Morgan is a low polished red granite marker inscribed JOHN PIERPONT MORGAN on the curved top and the years 1837 – 1913 on the front. The Morgan family burial is located in “Lot I, Section XI” of the cemetery.

J. P. Morgan died in Rome on March 31, 1913. His body was brought back to New York where his funeral was conducted, after which his coffin was transported by train to Hartford and a cortege overseen by the Episcopal Archbishop of Connecticut went from the train station, past Morgan’s birthplace and family residence, past Christ Church Cathedral, the Wadsworth Atheneum and then proceeded to Cedar Hill Cemetery for the interment. The cortege was witnessed by throngs of citizens and was described in the newspapers.