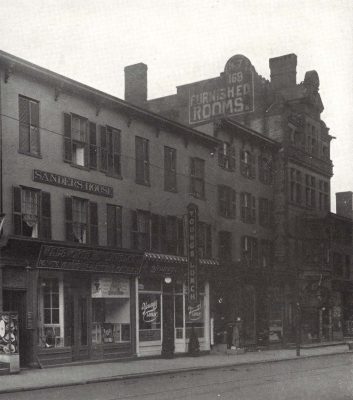 J. P.’s grandfather, Joseph Morgan had moved the family from a farm in western Massachusetts to Hartford where he became a publican, operating a coffee house and tavern. He later operated the City Hotel, invested in real estate, transportation by water and rail and helped to found the Aetna Fire Insurance Company. He established the family in a house at 26 Asylum Street. His daughters married into important Hartford families. Lucy married into the Goodwin family. Joseph’s only son, Junius Spencer Morgan, married Juliet Pierpont in 1836 and they were the parents of John Pierpont Morgan, who was born in his grandfather’s house at 167-169 Asylum Street in Hartford on April 17, 1837. The house no longer exists but a photograph of it later converted into a boarding house does survive.

Young Pierpont was called Pip by the family. Junius Spencer Morgan became a dry goods merchant with a store on Main Street. The family became affiliated with Trinity Episcopal Church where the Goodwin’s were a leading family. Junius’ business interests transitioned to banking causing him to move the family to Boston when Pierpont was 14.