You are at stop #8 on the American Revolution, Hartford tour 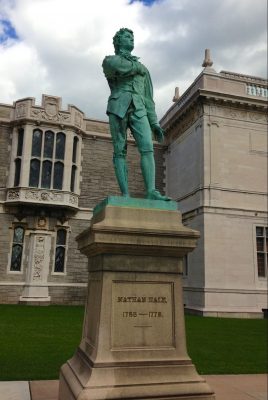 Enoch Smith Woods’ Nathan Hale was designed for a competition sponsored by the State of Connecticut for a statue of this patriot-hero to be placed in the interior of the Capitol Building.  The competition was held in the 1880’s, shortly after the centennial of Hale’s death.  Woods’ statue was the runner-up in this competition.  James J. Goodwin, who commissioned the statue even though it was not the winner, presented it to the Wadsworth Atheneum in 1892.  The statue was cast by M.H. Mosman in Chipcopee Falls, Mass., 1889, and is the only known version extant.  It was erected in 1894.  George Ulrich, a collector and patron of the arts, posed for the statue.

This larger than life-size bronze, measuring approximately 10 feet high, heroically portrays Nathan Hale, Connecticut born patriot, whose famous last words were: “I only regret that I have but one life to loose for my country.” Born in Coventry, Ct., June 6, 1755, Hale attended Yale University and taught school before fighting in the Revolutionary War.  On his return from a mission behind the British lines for Gen. Washington, Hale was caught.  He was hanged the following day, Sept 22, 1776.

Interest in Nathan Hale spread, and statues by other artists can be found in South Coventry, Ct., New London, Ct., Yale University, New York City, Washington, D.C., Virginia, and St. Paul, Minn.  A third version by Richard Hubbard as well as the winning statute of Hale by Karl Gerhardt are located in the State Capitol.