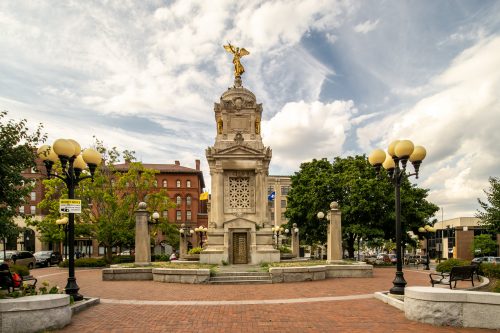 Ernest Flagg was commissioned in 1897 to design a Civil War Memorial for New Britain’s Central Park. The members of the New Britain community wanted to honor those who served in the “War of the Rebellion” with a Soldiers and Sailors Monument.

The finished creation was a limestone monument 44 feet tall. It is less dramatic in its height than its width. Flagg designed the monument in three parts: the base, the tomb, and the dome with a gilded allegorical Winged Victory on top. The Official Souvenir and Program of the Dedication of the Soldiers Monument described the base of the structure as the principal story that is bold and simple in its design. It has an open arch on each of the four sides and is flanked by Corinthian columns at each corner which support the main entablature. Above the entablature is the roof the interior that is supported by a colonnade, also of the Corinthian order. Inside is a single cell that extends upwards throughout the height of the monument. The doorways are very plain and are protected by a molded pediment in a single block. The doors are of open work in wrought iron. There were fountains at the edge of three sides of the monument.

Inscribed on the front side is an excerpt from Lincoln’s second Inaugural address: “With malice toward none, with charity for all, with firmness in the right,” as well as “Oh rare and royal was the sacrifice.” On the east side is a quote from Ulysses S. Grant: “Let us have peace,” and a dedication reading: “This monument is built in grateful remembrance of the soldiers and sailors who in the war to maintain the Union offered their lives in the cause of mankind that coming generations, taught by their example, may cherish the fruits of their valor and devotion, and make their memory immortal.” On the north side is a quote from United States Senator Daniel Webster: “Liberty and Union, now and forever, one inseparable.” The years of the Civil War are inscribed on the west side: “MDCCCLXI-MDCCCLXV (1861-1865),” as well as, “Erected by the Citizens of New Britain MDCCCXCIX (1899).”

Around the base of the structure are four stone pillars inscribed with the names of each Civil War battle. Inside the monument are the names of New Britain’s community members who fought in the war. Similar to the quotes, there are many decorative embellishments on the monument that coincide with the time period’s cultural and social context. On the east and west faces there are U.S. shields with eagles and crossed swords. Lion heads were put above fountains that were later converted into planters. On top of the dome is a gilded allegorical figure representing Victory holding an olive branch to symbolize the compromise of the Union and Confederate Sates. There are also gilded torches on the corner of each face.

Flagg said that he modeled the monument after the Choragic Monument of Lysicrates at Athens from 334 B.C. The classical influence fused with the ornamental detail is exemplary of the “Beaux-Arts” style of France. This florid classical style evolved at the École Nationale Supérieure des Beaux-Arts, the main official art-school in France, which was founded in 1795. The style fuses together classical forms of Greek and Roman influence with more delicate Renaissance and Baroque designs. This style used for public monuments gained popularity in the United States at the turn of the century. Flagg was a major figure in prompting the style’s ideals in the United States. He did so through the structural rationality of his works, which he would have learned from studies of Viollet-le-Duc. Flagg sought to change “The architectural climate of America, and especially of New York; during the last quarter of the nineteenth century … from an English to a French Persuasion.”

The talk of creating a Civil War monument first arose at a town meeting on October 12, 1868. In May of 1869 the Connecticut General Assembly voted to give $15,000 towards a New Britain monument if the project was set forth within one year. However, the town did act until after March 14, 1884 when the town took serious action to create a monument. At this time the will of Cornelius B. Erwin gave $2,000 toward a monument. The vote to levy a tax for the monument won at a town meeting on August 13, 1885 and the actual work was then started in 1897. The cost of the monument was about $28,000. Of that, the contractors received $21,957 and the architect received $2,422. It is not recorded how the architect and contractors were selected. Surviving documentation does not name the sculptor, foundry, or location of the stone quarry.

Thomas F. Bishop was the engineer. The monument’s medium included bronze sculpture with a limestone and granite base. M.J. O’Connor and James Muir were also contributors in the completion of the monument. The finished monument was dedicated at a ceremony that occurred on Wednesday, September 19, 1900 at the Hotel Russwin.

Inscriptions: : OH RARE AND ROYAL WAS THE SACRIFICE (the tablet on the lower front south face), WITH MALICE TOWARD NONE WITH CHARITY FOR ALL WITH FIRM NESS IN THE RIGHT, LINCOLN (above the tablet in attic), THIS MONUMENT IS BUILT IN GRATEFUL REMEMBRANCE OF THE SOLDIERS AND SAILORS WHO IN THE WAR TO MAINTAIN THE UNION OFFERED THEIR LIVES IN THE CAUSE OF MANKIND THAT COMING GENERATIONS TAUGHT BY THEIR EXAMPLE MAY CHERISH THE FRUITS OF THEIR VALOR AND DEVOTION AND MAKE THEIR MEMORY IMMORTAL (east face above the fountain), FOR YOU AND ME THEY PUT THEIR ARMOR ON (between the columns), LET US HAVE PEACE GRANT (above the tablet in the attic), FOR YOU AND MY THEY STOOD IN GRIM ARRAY (north face), LIBERTY AND UNION NOW AND FOREVER ONE INSEPARABLE, WEBSTER (above the tablet in the attic), MDCCCLXI - MDCCCLXV ERECTED BY THE CITIZENS OF NEW BRITAIN MDCCCXCIX (on the west face above the fountain), THEY JOINED THE MORTAL STRUGGLE AND WENT DOWN (between the columns), TO HEROES LIVING AND DEAR MARTYRS DEAD  LOWELL (above the tablet in the attic)

Between 1890 and 1920, known as the “Progressive Era,” America witnessed a great age of public sculpture. In these years between the Civil War and World War I major projects were constructed throughout the country. The memorials with elaborate architectural elements have been interpreted as visible and explicit assertions of the high cultural status of sculptors. They fuse aesthetic and social unity in a public display of civic ideals and their talents as an artist. American sculpture at the turn of the century should be considered in terms of the circumstances for its creation and the broader social and cultural context.