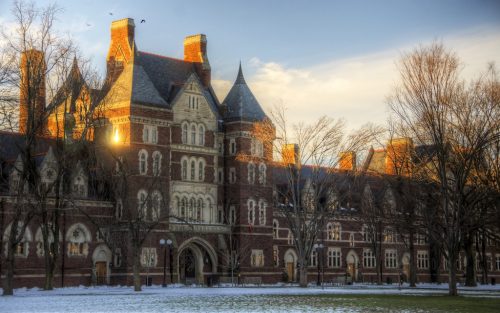 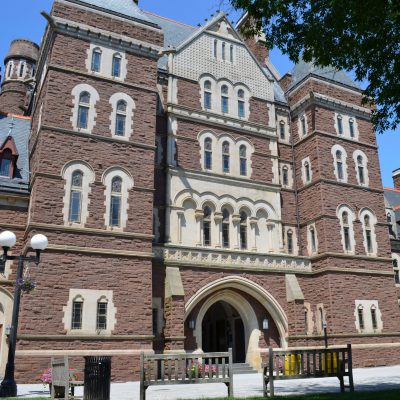 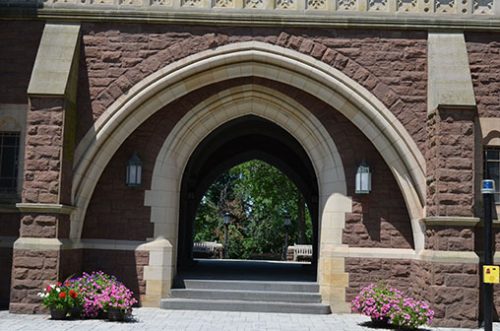 Erected in 1881 following the completion of the Jarvis dormitories and the Seabury lecture rooms, Northam Towers was constructed to connect the two wings of the Long Walk.[1] Burge’s original quadrangle plan had to be adapted to accommodate the college’s means, so rather than completing the original plan’s perpendicular wing, in its place Francis Hatch Kimball adapted one of Burges’s gatehouse designs to construct Northam Towers parallel to Seabury and Jarvis. Named after its benefactor Colonel Charles H. Northam,[2] completion of Northam Towers marked the completion of the west side of Burges’s middle quadrangle plan – the resulting structure now more than six hundred feet long.[3] Designed to be a dormitory, Northam Towers includes one-room doubles, two-room doubles, and several singles. The structure was built using brownstone with sandstone accents around the windows,[4] correlating with the materials used for Jarvis and Seabury. The central façade features a gable, flanked on either side by two chimneys. Rows of triple windows adorn the four levels of the central structure. On either side of the central façade are two towers, each featuring two windows on all four levels. Northam Towers, like the wings to either side of it, are emblematic of the High Victorian Collegiate Gothic style. These buildings were the only designed by Burges to be constructed in North America, and were influential in collegiate architecture throughout the country following their completion.[5]

Northam Towers has become one of the major focal points of Trinity College. The immense gatehouse creates a central entryway onto the campus’s main quadrangle, and is traditionally incorporated into the college’s official ceremonies. It was adapted from one of Burges’s gatehouse designs from his Four-Quad Plan, with its towers, roofs, chimneys, and other elements strongly resembling Richard Pullan’s drawings of the design. The finished work, however, resulted in a structure with larger proportions and a bulkier appearance, although still fully conforming to the overall style of the wings to either of its sides.[6]

Colonel Charles H. Northam was a significant patron of Trinity College and a member of the Board of Trustees. He donated the funds necessary to construct Northam Towers, and for his dedication to the school the building was named after him.[7]

Kimball had spent some time working on projects in Hartford before being hired to adapt Burges’s designs for Trinity College. Upon receiving the commission, Kimball spent several months in London studying the styles of Gothic architecture, so as to be better prepared to adapt Burges’s High Victorian Gothic revival designs in the United States.[8] This is apparent in the architecture of Northam Towers, which blends seamlessly into the High Victorian Gothic style of its adjoining wings, Seabury and Jarvis.

Trinity College students were not ecstatic about the siting for their new campus, stating in the college journal, “The Trustees have seen fit, in their wisdom (?) to purchase the property adjoining the stone pits. Being in the immediate proximity of two cemeteries and the Insane Asylum, it is favorably regarded by the students.” However, overall it seems that the students were pleased with the final results of the structures on the Long Walk.[9]

The entire Long Walk, including Northam Towers, underwent extensive renovations beginning in 2007. These renovations included restoration of the structures’ original windows, the installation of a new slate roof, as well as updates to the buildings’ various amenities. The architectural firm Smith Edwards designed the exterior renovations and Consigli Construction carried out the physical work.[10].

View additional details to the right.