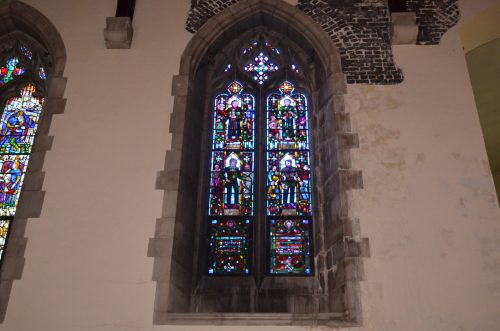 The Ogilby and Brent; Emerson and Thoreau Windows depict the “American Friendships” theme. Both were completed in 1948. Dr. Ogilby and Rowan LeCompte worked on the iconography of these windows together. The color of the windows are darker than the neighboring windows because some felt that the Sanborn memorial next to this window was too bright in the morning. The upper panel of the Ogilby and Brent window shows Ogilby introducing a Trinity man to St. Peter. In Dr. Ogilby’s hands is a model of the college’s chapel. On the right is Bishop Brent whom is holding a cross that covers the globe, a symbol of his dream for a united Christian church.

The Emerson and Thoreau window depicts an oppressed figure breaking chains on Emerson’s right and on his left is a mystic. On the right panel, Thoreau is shown with another man gathering sheaves and a younger man reaching for a star.