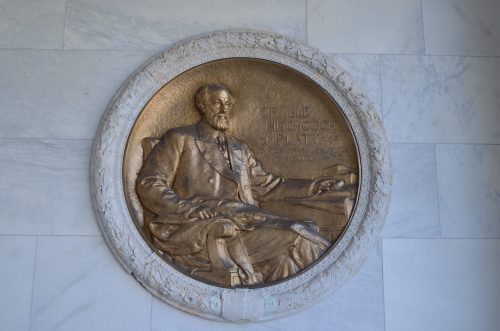 Hermon MacNeil’s bronze relief roundel memorial to Orville Platt is inside the North Portico of the Capitol on the right hand wall. Orville Hitchcock Platt (1827- 1905) served his native state of Connecticut for fifty years. He began public service as clerk of the Connecticut State Senate in 1855 and in 1857 became Secretary of State. In 1864, Platt was elected to the House of Representatives and in 1869 he was elected Speaker of the House. From 1877 to 1879 Platt served at the State’s attorney from New Haven County. In 1879 Platt was elected to the United States Senate and held that office until his death in 1905. He was promised this memorial on the grounds of the capitol for his long service to Connecticut.