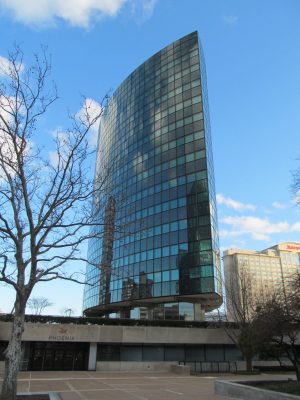 The Phoenix Mutual Life Insurance Building (familiarly known as the “Boat Building”) made history instantly with its distinctive first-of-its-kind two-sided form. The shape is properly called an elliptic lenticular cylinder. It is 225 feet long on its axis and only 87 feet at its widest point. At true glass curtain wall building, it is 13 stories tall. In the year of its ground-breaking, 1961, the architect, Max Abramovitz won the Rome Prize for emerging architects. The office building, home to the Phoenix Companies, played a pivotal role in Hartford’s urban renewal movement and is the most successful of the 1960s urban renewal buildings raised on terraces contiguous to Constitution Plaza.

The unusually shaped building has been a landmark on Hartford’s skyline and is visible at a distance from Interstates 84 westbound and Interstate 91. The sides of the building face north and south, while the ends point west and east. In 2005 the building was named to the National Register of Historic Places. In 2010, the building was awarded Silver LEED (Leaders in Energy and Environmental Design) certification from the US Green Building Council. The glass windows face the Connecticut River and have now been fitted with automatic shades that lower depending on the sunlight and time of day to combat the powerful heat gain that was an unexpected consequence of the sheer south-facing glass wall.