You are at stop #5 on the American Revolution, Hartford tour 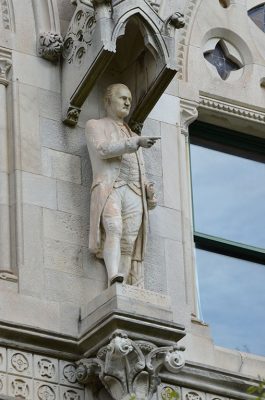 Roger Sherman by Chauncey B. Ives is a seven foot marble statue made in 1878 and is currently located at the State Capitol building in Hartford, Connecticut. The Roger Sherman statue makes up part of the scheme of the east façade of the Capitol (second figure from the left), commemorating Connecticut citizens’ role in the Revolution and founding of the Republic. Sherman (1721-1793) was first Mayor of New Haven, a delegate to the first Continental Congress and a signer of the Declaration of Independence.

Ives completed the Sherman in Rome by March of 1878, and the statue was erected over the eastern entrance of the Capitol by November of that same year. Typical of Ives’ later work, the Sherman shows the sculptor’s inability to harmonize the parts of the body into a proportional whole. The head appears too large for the body and the legs are out of proportion. Like Ives’ Trumbull (see below), the Sherman becomes a costume piece. Sherman is portrayed in a rather formal pose with his right arm partially extended as if he is about to make a statement. His left arm holds a scroll. The facial expression and eyes are idealized and yield little insight into the nature of the subject.

The Sherman on the Capitol façade parallels the earlier Roger Sherman Ives created in 1870 for the Statuary Hall of the National Capitol in Washington D.C. Again, like the Trumbull, the earlier version of Sherman is about a foot taller and portrayed in a long cloak. However the pose and facial expression are essentially the same. Moreover, both versions exhibit the same lifeless quality.

East Facade (Second from the Left) of the State Capitol Building, Hartford