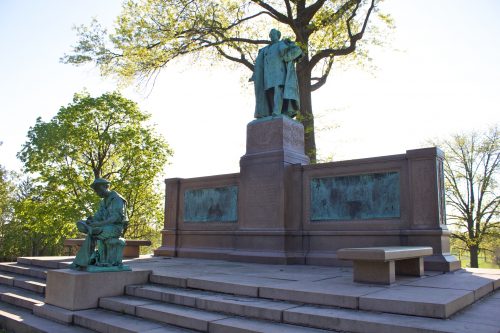 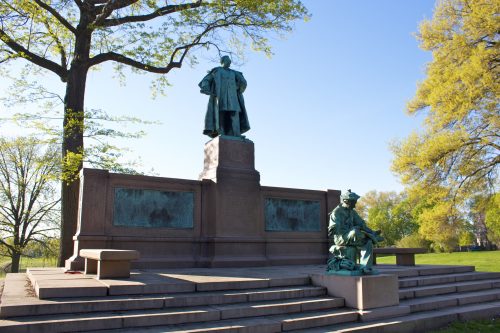 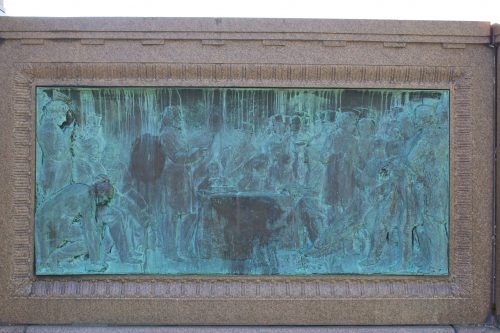 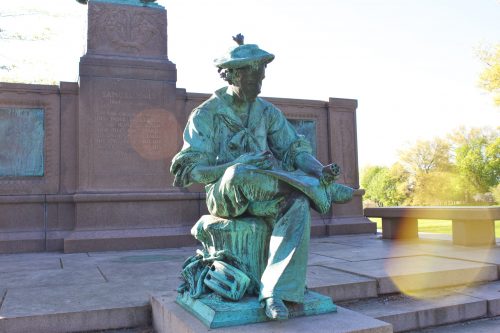 Samuel Colt (1814-1862) was the first industrial tycoon in Hartford. He invented the Colt revolver, which made him a millionaire overnight. Some of his other inventions were the first waterproof ammunition, an electrical submarine mine, and the first telephone business to employ an underwater cable. When Colt died at the age of 47, he left behind a grieving but devoted wife who spent the remainder of her life preserving his legacy. The Samuel Colt Monument by Massey Rhind marks the entrance to Colt Park and stands near his house, Armsmear and the Colt Armory. On April 26, 1905, Elizabeth Jarvis Colt commissioned Rhind to make this memorial in memory of her late husband.

Rhind uses a historical conceit to simultaneously show four important moments in the life of Samuel Colt. Samuel Colt is depicted as both the inventive young sailor boy whittling his first wooden model of the gun, which would make him famous, and as a grown man and international hero. Rhind achieves this by creating two separate figures. Between the five steps leading to the monument is a free standing figure of Colt as the young sailor sitting cross-legged upon the pier examining the wooden gun barrel he has completed. At the top of the steps is a base over six feet tall upon which stands Samuel Colt as a grown man. He steps forward on his left foot and gazes into the distance. His left hand is on his hip and his right hand holds some folded documents. On the base directly beneath Colt is an inscription which sums up Colt’s character. “On the grounds which his taste beautified, by the home he loved, this memorial stands to speak of his genius, his enterprise, and his success and of his great and loyal heart.” On either side of this inscription are two low relief plaques. The right hand relief shows Colt being presented to the Russian Czar, and the other relief shows Colt demonstrating the gun to the British House of Commons. These reliefs refer to Colt’s tour of Europe in 1854, when he was acclaimed for his “inventions and contributions toward peace and perfection of his automatic repeating revolver.” Rhind is successful in creating a monument, which suggests several moments in time, which are arranged spatially to create harmonious unity.