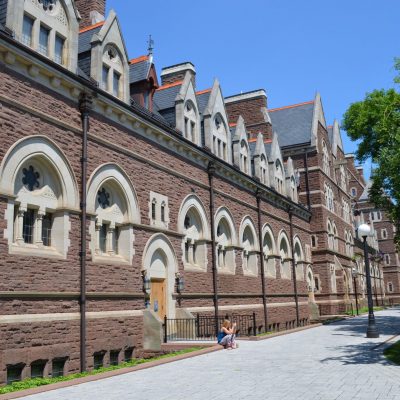 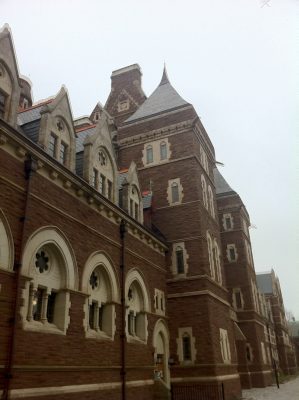 Seabury Hall is a magnificent building that stands opposite of Jarvis on the Southern side of the Main Quad. The building looks out onto a romantic view of the city of Hartford and carries a light muddied red hue. Together with Francis Kimball serving as an advisor, the trustees of Trinity hired William Burges to design the construction of a new campus. The original building was demolished “After a half century of service to the college, [in] the summer of 1878”[1]. Seabury’s relocation to Rocky Ridge in Hartford remains its current site.

Burges originally intended the Trinity Campus to consist of two quads surrounded by a quadrangles. The design is very English and follows an aesthetic appearance similar to that of Burges’ designs in Worcester College, Oxford University and Harrow School. Sadly, the original plans for Trinity College were deemed too expensive, and gutted. Francis H. Kimball’s consultation eventually reduced the plan (its fourth edition) to what it is now. The building has a “three-story, pitched-roof brownstone edifice distinguished at the front by its four-column, Ionic portico with plain entablature”[2]. The Neo Romanesque style holds a mixture of Medieval and post-Medieval styles. A “closed pediment above, and at the rear by its two stage, square bell tower with corner finials”[3] complements the structure. As a champion of Victorian Gothic and Romanesque styles, the architecture is very typical of Burges. Burges plans are similar to the “eastward-facing, symmetrical, three-building row [from] the original Yale row scheme and [other] pre-Civil War colleges and universities”.[4] At first, the building held facilities referred “to as College chapel during its first twenty years, the eighty-seven by fifty-five foot structure contained its largest room, the chapel.”[5] This building represents the height of College architecture before the 1860s.