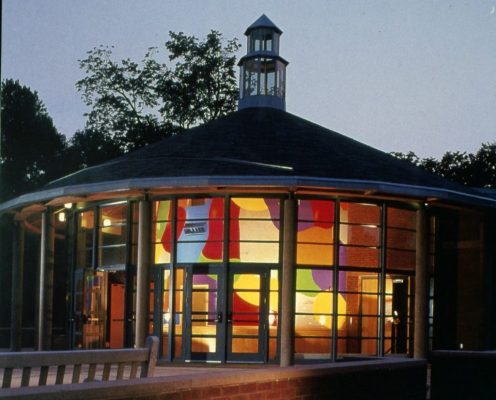 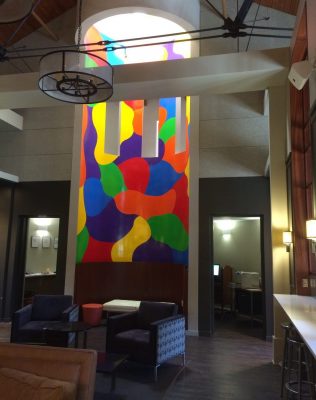 Sol LeWitt generously placed on indefinite loan to Trinity College his Wall Drawing #849: Irregular Blobs of Color. He and his wife Carol made this offer in recognition of his long association with the building’s architect Tai Soo Kim and as a favor to Professor Alden Gordon who was at the time directing improvements to the Trinity College campus. The artist also had a nostalgic association with the campus and its neighborhood where he played in his early childhood when his parents lived nearby. His parents are buried in the nearby Zion Hill Cemetery.

LeWitt proposed three schemes for this unusual two-sided wall, a concave inner cylinder and a convex outer drum. Trinity College owns the artist’s original drawings for the three versions of the project. The final drawing was done in June and July 1998 by a collaborative team of LeWitt’s assistants and Trinity College students and faculty, including Lana Abraham, Sachiko Cho, Amalie Flynn, Alden Gordon, Tory Marsh, Kevin Oster and Kim Piotrowski. The Edward C. and Ann T. Roberts Foundation, Inc. of Hartford funded the creation of the work.