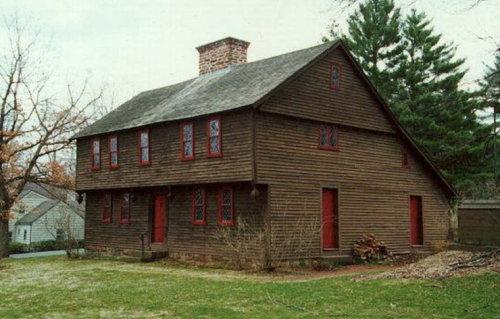 The Stanley-Whitman House stands on six acres of land on 37 High Street, Farmington, CT.  The house was purchased by Ebenezer Steel from the existing inhabitant, Deacon John Stanley, on December 31, 1720.[1] Ebenezer Steel died two years after purchasing the house and his oldest daughter, Mary, inherited it. In 1735, Mary and her husband sold the house to Reverend Samuel Whitman.

Designed in Post Medieval- style, the Stanley- Whitman House is one of the few surviving examples of the earliest New England architecture. The house was designed with a chimney made out of field and sand stone, located in the center of the plan. This then leaves the rest of the house split into two symmetrical halves, which are the parlor and hall “with two chambers above provided both living and storage space”.[2] The Colonist builders who constructed the Stanley- Whitman House used local wood to create a post and lintel system for the frame of the house. Like most typical colonial houses the second floor is extended out eighteen inches and creates an overhang on the first story.[3] This is called a “lean- to” addition and gives more space to the top floor as inhabitants weren’t taxed for it. Hanging off of the second story overhang, there are four drop pendants that are embedded into the beams of the frame of the house. Added sometime in the mid eighteenth century, Whitman also extended the roof line to create a “saltbox silhouette” in which the Stanley- Whitman House is famous for.[4]

The Stanley- Whitman House was designated a National Historic Landmark in 1960. Today it is a museum, no longer a home for people to live in. With much history surrounding this house, it is also a staple of colonial architecture and the styles involved.