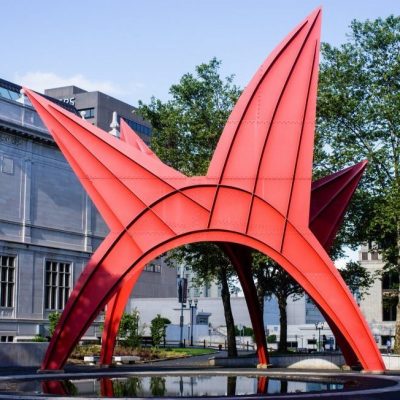 Calder’s Stegosaurus is exemplary of his “stabiles” produced after 1937. Named for a dinosaur from the Wyoming and Colorado regions, Calder’s Stegosaurus is the culmination of a sixty-six year project which began with a grant to the city of Hartford by Ella Burr McManus.  According to Mrs. McManus’ wishes, “the most gifted and competent sculptor known” was to build a  memorial to her father, Alfred E. Burr, founder of the Hartford Times. Calder was chosen in the late 1960’s after a five year search.

The original twenty-four inch model was presented on May 31, 1972.  Constructed from the plans of the sculptor, the bright orange-red steel structure rises fifty feet in height with a span of thirty-two feet.  The sculpture was dedicated in 1973. It was restored and repainted in October, 2016.

This is the only full-scale version constructed after his model and plans.  The small-scale version called Stegosaurus, Jr. and was installed in 1975 at the University of Connecticut Health Center in Farmington, but was sold in 2000.

The particular appeal of Stegosaurus, and of all Calder’s stabiles, is the subtle interplay of line and curves, of fluidity and elegance, as opposed to stability and weight. The open form of Stegosaurus contrasts with the massiveness of the adjacent building.  Calder’s abstracted sculpture of a dinosaur is placed beside a fountain in Burr Mall to suggest a beast coming to drink at a pool in the woods. The Burr Mall landscape design was made by Dan Kiely, q.v.