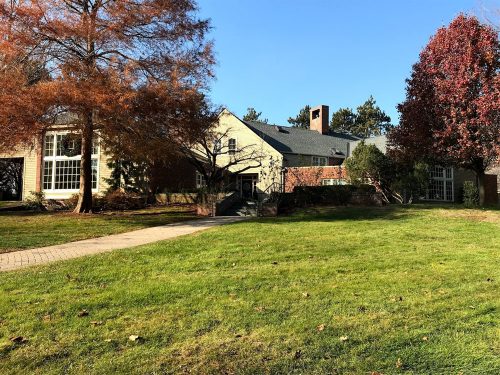 The current residence of the president is located at 133 Vernon Street on the corner approaching Summit Street. The brick house for the president was designed and built in 1978 by Jeter, Cook and Jepson Architects Incorporated, located in Hartford.[1] The architects combined a residential style with scale of a public center as well as considered the surrounding architectural styles, such as the tudor of Ogilby, the Victorian style of the old house, and the Gothic atmosphere of the central campus.[2] One of the architects, David Jepson explained their solution as a “transitional style that relates to the scale and atmosphere of the nearby institutional buildings, yet makes a strong, contemporary statement.”[3] The painted white brick was designed to soften over time, alluding to a traditional style and enhancing the asymmetrical lines of the building.[4] While the entertaining section of the house faces the south of campus with a spacious terrace and large windows framing the Chapel and Downes Memorial, the private family area and the presidential study face the pine trees of Summit Street and transitions to the public space with a large kitchen and dining area.[5] In addition, the house uses a solar hot water system and the skylights and high ceilings accentuate the spaciousness of the rooms.[6]

Although the original president’s house was the Victorian building at 115 Vernon street for 93 years, Trinity’s administration decided to move the English Department and new Writing Center from Seabury Hall into the old president’s house.[7] This solution provided more space for academic purposes in Seabury Hall as well as a separate space for the English Department and Writing Center.[8] In addition, the new building was designed to function as a public and private space for the president at the lowest cost, rather than building an additional office building for example.[9] The project was planned in accordance with the timing of other construction on campus, such as the Wheaton, Smith, and Jackson Halls.[10] Under President Gerety, however, the President’s House was converted into an Admissions Center for the year of 1992, while the president and his family lived in a more residential neighborhood.[11]