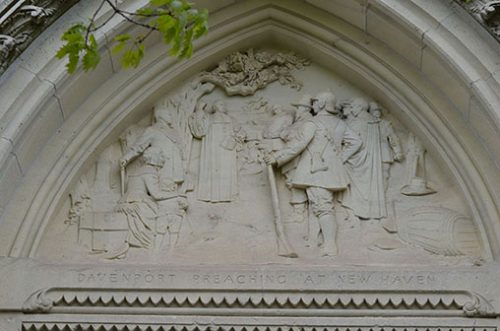 The entire east façade of the Capitol Building recounts the early history of the Connecticut Colony. Artist Charles Henry Niehaus was assigned to create two important scenes from the history of the settling of Connecticut in the pointed archway panels (tympana) at either side of the central arch of the East façade of the Connecticut State Capitol.  The right-hand tympana is dedicated to John Davenport (1597-1670), and shows him preaching to the puritans in Connecticut’s recently founded New Haven colony in about 1638. Davenport was an English-born Congregational clergyman who embraced Puritanism and left England in 1633 for the Netherlands to support international Puritanism. Davenport left Europe for America in 1637, going first to Boston with Theophilus Eaton who would later become the first governor of New Haven Colony. The New Haven Colony was originally founded in 1638 as the town and colony of Quinnipiac. An influential conservative preacher, Davenport left New Haven around 1667 to lead the First Church in Boston. Niehaus completed John Davenport in 1895, and finished his second piece, Thomas Hooker, in the same year.

Niehaus’s second tympanum depicts Thomas Hooker leading the first white settlers to Hartford. Both of Niehaus’ compositions are carved in shallow relief. The artist depicts spatial recession by progressively diminishing the height of the relief from the foreground to the background. Niehaus emphasizes the upper bodies of each figure, using the highest relief for the heads. No attention is given to unimportant details. By means of gestures and the placement of the few highly articulated figures, the focus of each work is made clear. The dress of the figure is that of Colonial America. The women are dressed in jackets over stays, along with long skirts and a bonnet. The men, with their rifles, wear loose trousers and heavy topcoats.